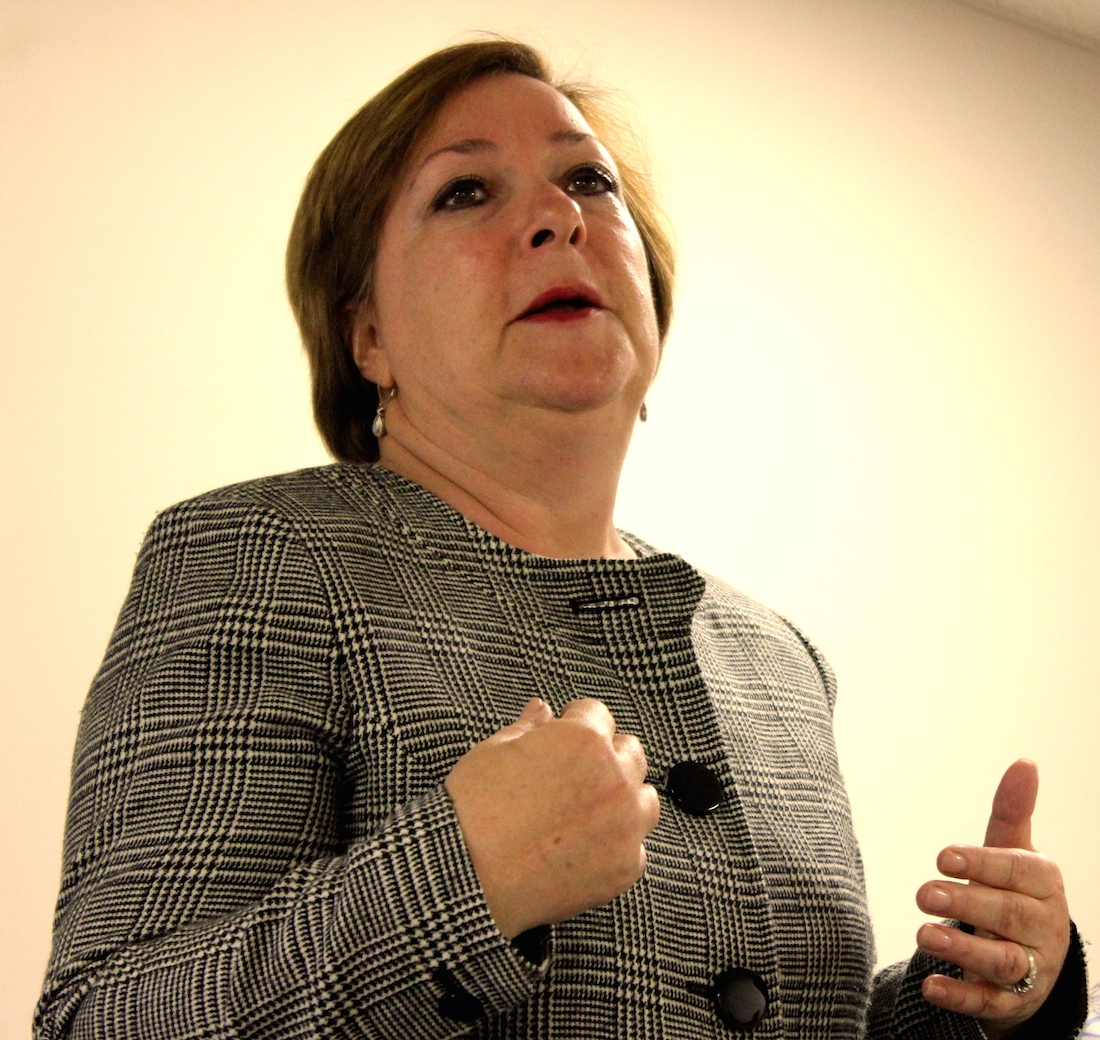 Stephanie Borden, owner of One & Done Concierge and Personal Assistant Services, pitches her businesses to members of the TAG Network on Wed., May 18. (Photo by Kevin G. Andrade)The SouthCoast Teamwork Advocach and Growth (TAG) Network for Smal Businesses is starting up growth in Fall River.

With the objective of offering opportunities for networking to local entrepreneurs to help them learn about new products, learn new strategies and grwow their businesses further.

The TAG Network for Small Businesses (TAG Network) met for the third time on the morning of Wednesday, May 4.

Alongside some liquid energy in the form of coffee, members spoke on their businesses, loans and the objectives of the group of 17 business owners and startups.

“We tried to start something similar to other networking groups in the area,” said Lisa Stantieski, a business banker with Rockland Trust and core member of the TAG Network. “We have a good core group of people and we want to be structured.”

In addition, those in attendance listened to a presentation by Joanne Costa, a mortgage consultant with Accutrust Mortgage.

“I’ve been in this business for about 20 years,” said Costa at the outset of her talk.

From that moment on, she spoke about the recent changes that have come to mortgage lending of which potential borrowers should be aware. She said that her hope was for people to take what she is teaching and protect themselves from shady deals.

“When you apply for a mortgage people are used to seeing a single-page good faith estimate,” she said. “Now there’s a multi-page loan estimate.”

In addition, whereas many lenders would add on last minute fees, they are now required to provide a final estimate of interest rates and other factors within three days of closing.

“That’s what your rate is,” she said. “So it would be hard for me to tell you what ‘your rate’ would be today.” 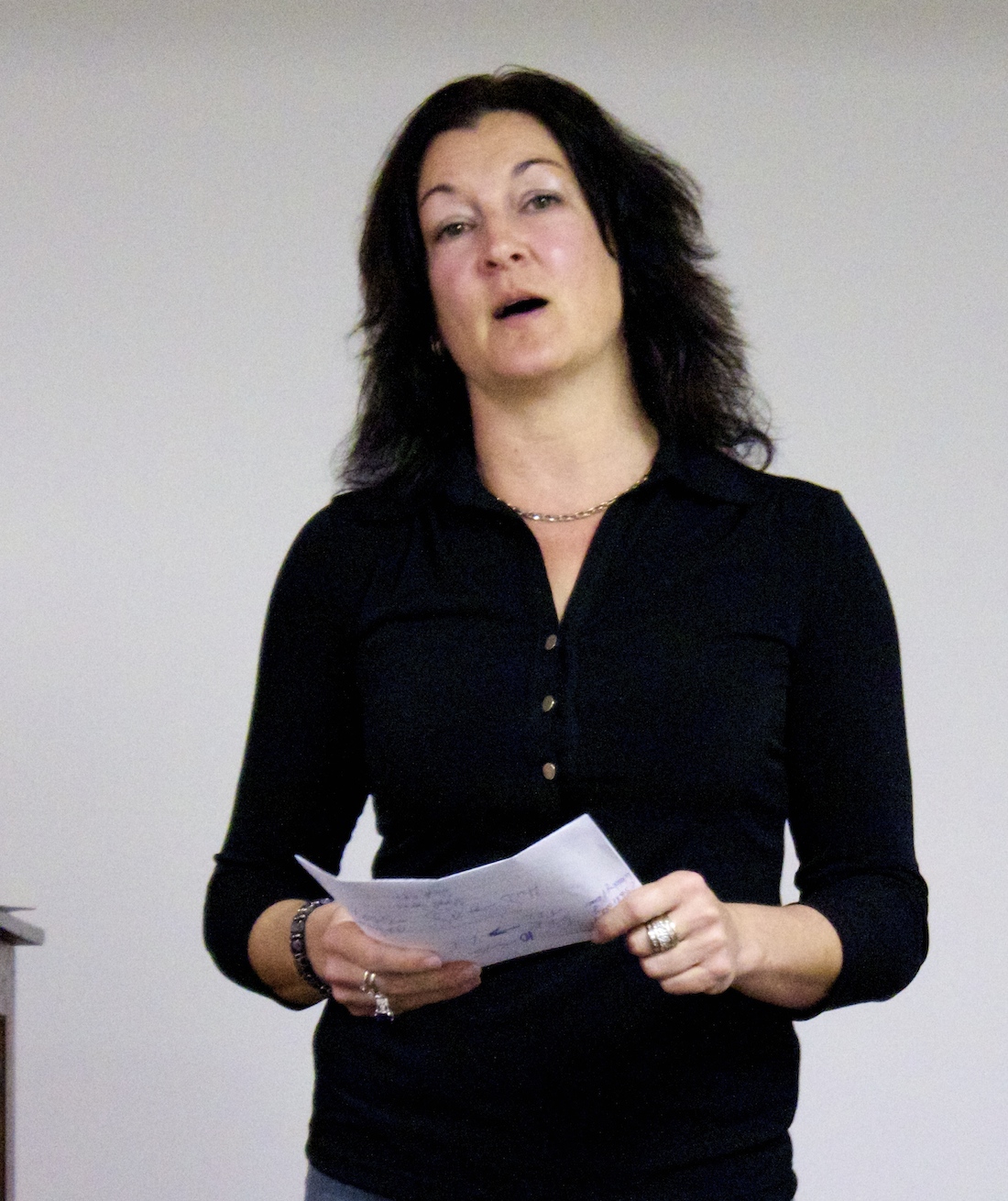 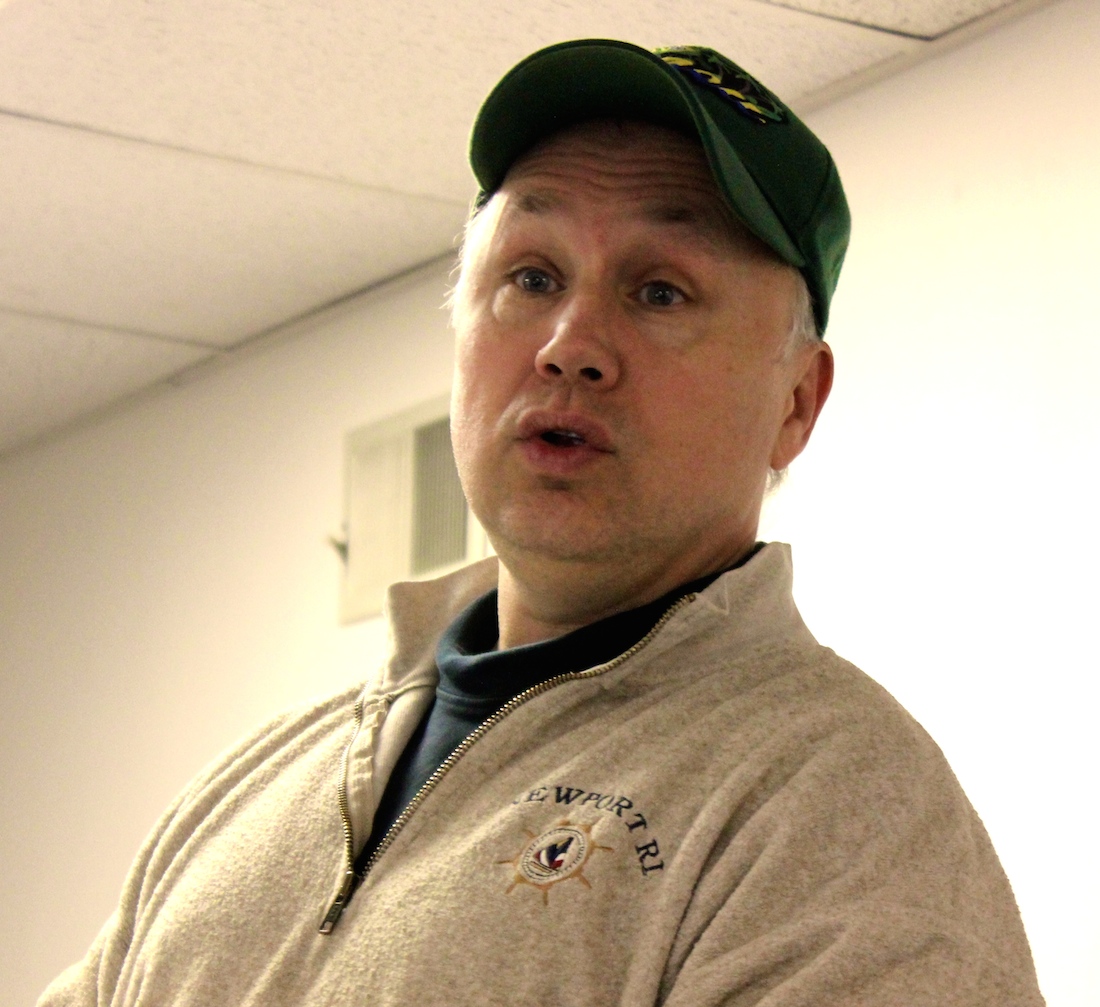 Christopher Nielsen, owner of CNP Integrations, speaks about his business and some of the customers he supports, during the TAG Network Meeting on Wed. May 8. (Photo by Kevin G. Andrade)

Joanne Costa, of Accutrust Mortgage, makes a presentation about mortgage lending to the TAG Network on Wed., May 4. (Photo by Kevin G. Andrade) 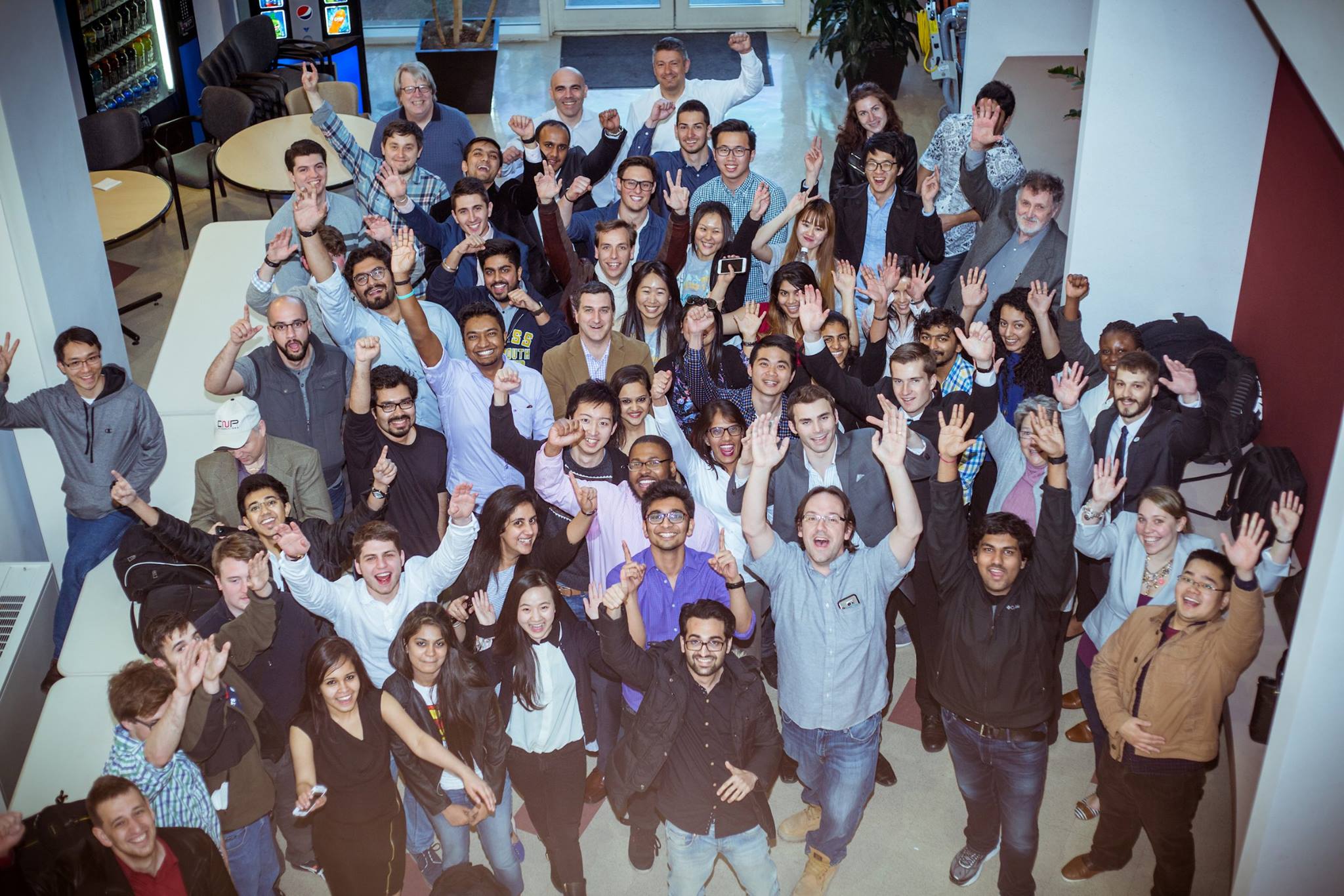 Startup Weekend -Photo courtesy of @Tou Kun,Members of the Business Innovation Center team were amongst the participants and coaches at the Third Annual UMass Dartmouth Center for Innovation and Entrepreneurships’ Startup Weekend competition from April 22 to 24.

The proceedings gathered around 70 participants divided into eight teams in order to hash out business ideas. Given 54 hours, they were to create pitches, code and fully flush out their initiatives.

But they weren’t alone in the process.

“Being a mentor is about problem solving and giving of your self,” said Christopher Nielsen, founder of the Business Innovation Center and one of nine mentors helping participants nurture their ideas. “It is always interesting, challenging and often inspiring to approach things from a new pair of shoes and then to walk in them on someone else's path but being able to call upon my own unique experiences.”

In spite of the seemingly daunting parameters of the challenge, it wasn’t as grueling as it appears according to one participant.

“There was more of a feeling of excitement than being overwhelmed,” said Zack Martin, BIC program manager as well as Startup Weekend participant. “It wasn’t really stressful ever.

“It was fun to work with people that I never met before,” he continued, “who brought different skills to the table.”

Martin was part of a six-person team that created a mini-GPS tracking system called Footstep.

Footstep is a device designed to protect your property in situations where valuables may be left in your vehicle. Should someone break into the vehicle, the device would feel the motion of the break in and notify your phone.

A second notification would be sent to the users cellular device should it then begin to move with the presumed robber.

Martins’ team actually came in second-place out of the eight competing teams.

“It was amazing to place, that felt great,” he said. “The team that won had an original idea that deserved to win.”

The winning team was called LifeSync and created a prototype for a carboximeter – a device to help people suffering from Chronic Obstructive Pulmonary Disease.

For both mentors and participants, the experience was a rewarding one.

“It was quite an interesting process and it allows me to grow,” said Nielson. “To help others fulfill their goals and be able to offer more again every time I do it.”

Martin also learned something that he says he will take with him through any future business endeavors.

“It was competitive but it was a friendly competitive,” he continued, reflecting on the experience. “I think it’s worth doing for anyone that wants to start a business… It was an amazing place and it felt great.” 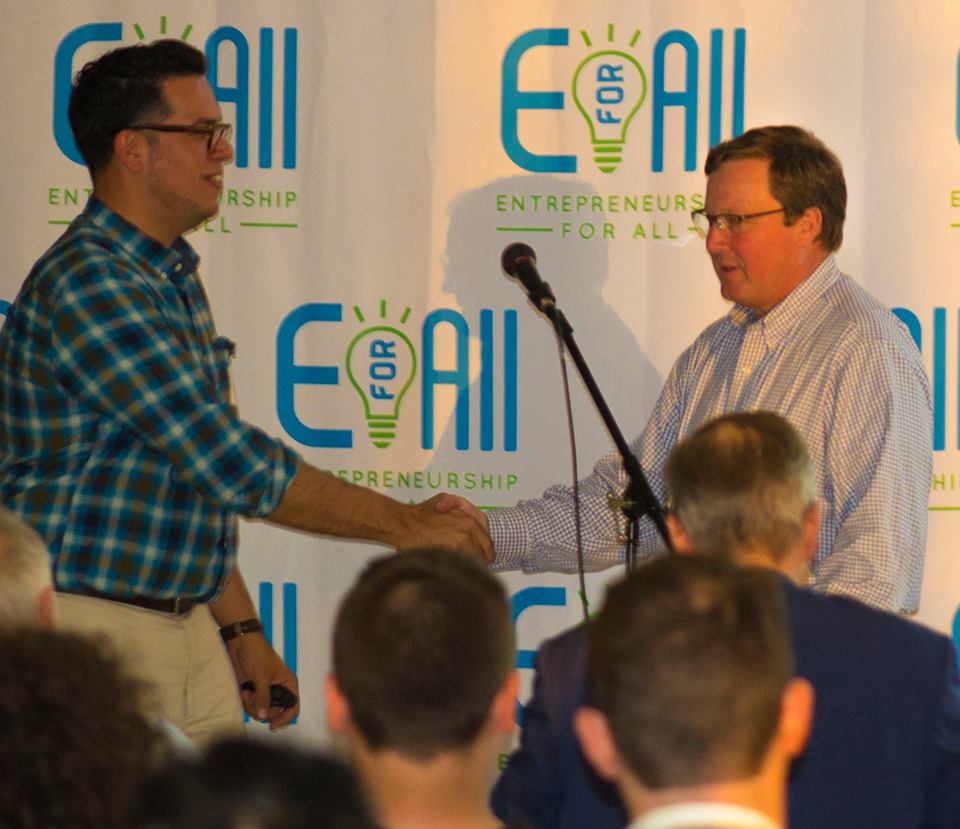 There has been a huge movement in the amount of individuals who have decided to take the journey of becoming self employed by creating their own startup company. Many fail to realize the amount of energy and risk involved in bringing to life the next big idea for a business. With the businesses that do succeed comes entrepreneurs who understand the secrets that lead to the success or failures of any given business. Through the efforts of some of these self-made business men and women, there are now programs focused on breeding more of the entrepreneurial type of people. One of the catalysts that is trying to make a difference in the startup world is EforAll. EforAll is a 501(c)(3) non-profit organization dedicated to accelerating economic and social impact through entrepreneurship in mid-sized cities.

EforAll started in December 2010 as the Merrimack Valley Sandbox, a non-profit with initial funding from the Deshpande Foundation. The Deshpande Foundation at that time had two other successful programs up and going at the Massachusetts Institute of Technology (MIT) and the Hubli Sandbox in Hubli, India. Both the MIT and Hubli programs encourged entrepreneurship as a means to improve communities, and building on that success, the Deshpande Foundation decided to try to use entrepreneurship to help the cities of Lowell and Lawrence MA, both of which were struggling with high unemployment in the shadow of the very visible entrepreneurial activity 30 miles away in Boston. Once their tactics proved successful they started to focus on new territories throughout Massachusetts. Among other locations, the non-profit found themselves entering the South Coast region, mainly Fall River and New Bedford. Both cities dealing with high unemployment rate as well.

EforAll runs a year long program which starts with an accelerator at the beginning that lasts three months. The way the business idea is accelerated is through classes and teachings, workshops, and pairing the entrepreneur with three mentors that they are expected to meet with weekly to help build the business. The mentors are people who love to see others succeed. They can be people who have already built a business or are in the process of it. "Some of the mentors have young businesses that have only been around for three to four years while other businesses owners have been in a particular industry for decades" says Jeremiah, who is the Program Manager at EforAll.

Part of the reason why EforAll is so successful is because of employees like Jeremiah Hernandez. He spends majority of his time organizing all the events along with all the people necessary to keep the program moving. He is constantly working hard out of the Business Innovation Center in Fall River and Groundwork! in New Bedford, which are both co-working spaces. Before the accelerator even starts, Jeremiah has to accept 40 applications which are to be read by a readers pool and then graded on a number scale. Each application is read four to five times by different volunteers. The volunteers range from high school seniors to retired business man to give each application a fair shot of making it into the program. Once each business idea does get accepted, Jeremiah has to begin managing the accelerator, which involves dealing with the entrepreneurs as well as the mentors. He then has to manage all of the volunteers who help run the program. "Its a challenging task sometimes trying to make everything work together" says Jeremiah "but when it all comes together, it's more than worth it."

Even if you own an already existing business, but still want to get help in the program, have no fear. They still do allow individuals with businesses to join in as well. The only time an individual can't be a part of EforAll is if the business recieved more than $25,000 in funding or investment. "When investors of any sort are thrown into the mix, working with a business becomes tougher" explains Jeremiah. The investor in most cases will try to interfere with the work that the entrepreneur is trying to accomplish. By leaving out the Invester, more work can be accomplished.

EforAll has many locations situated all over Massachusetts. The one located in South Coast just recently finished their first program and with it awarded $30,000 in cash prizes to multiple startups. Jeremiah is confident with the recent graduates from the program will come long standing businesses. "There was one software company that won the 4th cash prize and was also given the opportunity to work with its targeted audience through the mentorship program. One of the mentors was able to connect this future business owner to one of the big four accounting firms in Boston, KPMG." It seems that EforAll has something good going and hopefully as they attract more hungry entrepreneurs you will start to see them grow throughout the country.

Entrepreneurs find sanctuary at the BIC

In January 2016 we start a series of FREE workshops presented by SCORE and the SBA. This series with take you from start to finish on the process and options available for launching or growing a small business. It is for people looking for information and resources that can help them on their journey through being an entrepreneur. In addition to this ongoing series of workshops SCORE has chosen the BIC as a home for providing one on one counseling. Download the flyer or visit our meetup group to sign up.

We are pleased to announce that EforAll has chosen to make the BIC their home in Fall River. They have become our newest member of the coworking space. I will be working with this program volunteering time as a mentor to help young entrepreneurs launch their businesses and turn their ideas into viable products or services. For more information visit their web site: http://www.eforall.org

Through out the year you will see more programs around helping business development in our area. If you know folks interested in professional development or looking for help starting a business please call or stop by the BIC and we will help direct you to a program and resources that will best fit your needs.